Recently I read the first “self-improvement” book that has genuinely led to me changing my habits. Atomic Habits by James Clear provides a very simple and practical way to develop good habits (or unlearn bad habits) that can snowball into great achievements and lifestyle changes. He clearly demonstrates how many great achievers get there through the compounding of tiny changes. After the first chapter I noticed the same transient excitement that I often get when I read any “self-improvement” book, but then Atomic Habits introduces a simple and practical model to take that excitement and start making tiny changes after only the second chapter. The one aspect from the introductory chapter that particularly resonated with me was the concept that for a habit to stick it must be in line with our perceived or intended “identity”. An example given is that “the goal is not to read a book, the goal is to become a reader”. If you take on this identity of being a reader then the motivations become much more intrinsic, you naturally ask yourself “is this what a reader would do?” 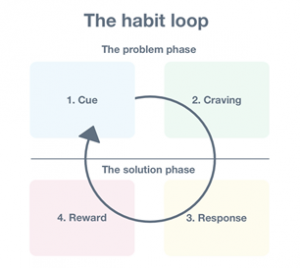 I will attempt to summarise Clear’s model, but I whole-heartedly recommend reading the book to get the full effect.

The whole model is based around four stages the mind and body go through when a habit is being developed (usually an entirely unconscious process).

Stage 1: Cue – a piece of information that reminds you of a potential reward (eg. you see your fridge)

Stage 2: Craving – the mind/body motivation for the reward (eg. you get excited by the thought of food)

Stage 3: Response – the action/habit (eg. looking in the fridge and grabbing a snack)

Here is how the model uses these four stages for intentional habit-building, and how I started to apply each element to help me do exercise after work rather than flopping on the couch and struggling to get the motivation to get back off the couch. The model also works in the opposite way to unlearn bad habits.

Stage 1 (cue): Make the cue for your intended habit obvious (I used Clear’s “habit stacking” method by identifying a habit I already have – taking off my work shoes – to be the cue for putting on my activewear; an obvious cue for exercising).

Stage 2 (craving): Make the intended habit attractive (Clear explains how our bodies crave an immediate response, so thinking about the final goal such as running a marathon will not elicit an internal craving for the habit. For my exercise habit I am using Clear’s example of thinking about the immediate after-effects of exercising, thereby developing a craving for the exercise-high).

Stage 3 (response): Make the intended habit easy (I am only committing to 5 minutes of walking/running/yoga and even if I stop then, it will still contribute to the repetition required to solidify the habit – as you could guess I have always continued after 5 minutes since the hard work of getting going is already done).

Stage 4 (reward): Make the intended habit satisfying (I take a moment to revel in the exercise high, allow myself the slow walk cool down, feeling high and mighty, and grant myself the guilt-free evening on the couch).

Some of the elements may seem like common sense but often we miss one part, and it is the one thing that leads to a failure to keep up with new habits. I encourage you to try applying the model to a habit you would like to develop and see if there is something missing. Happy habit-forming!

Be the first to start a conversation